Authority Made Visible During the Edo period (1603–1868), every town had its own kosatsuba, or public noticeboard, where national edicts were displayed on peaked wooden tablets like this one. These noticeboards were situated in prominent positions by the roadside. This one, for example, stands at what was once the northernmost end of Tsumago. The wooden tablets were placed high enough to be easily seen and to project a sense of the government’s authority. This board originally stood about 10 meters down the hill on the same side of the road. The noticeboard is a 1970 reconstruction, but what is written on the wooden tablets comes from the Edo period. From top to bottom, they are: (a) a prohibition of demonstrations and gatherings (top left); (b) a prohibition of Christianity (top right); (c) official prices for travelers (middle left); (d) a notice on maintaining public morals (middle right); (e) a prohibition of counterfeit money (bottom left); (f) a prohibition of arson and theft (bottom middle); and (g) more official prices for travelers (bottom right). 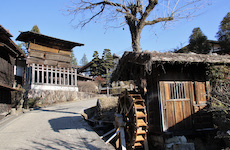