The Fish that Fell to Earth This large rock, probably brought here by a landslide, is known as Carp Rock. For centuries, it was a well-known landmark for weary travelers on the Nakasendo. Unfortunately, its resemblance to a leaping fish was seriously diminished by the 1891 Mino-Owari Earthquake. The 8.0-magnitude temblor—the strongest inland earthquake in Japan’s history—caused the rock to break, and the front part fell about 90 degrees. The print from the 1806 book Kisoji Meisho Zue (“Pictures of Famous Places on the Kiso Road”) reproduced on this signboard shows the rock in its original state (although the fin on the side of the rock is an embellishment added by the artist). Look closely and you can still see something resembling a mouth at the base of the rock. 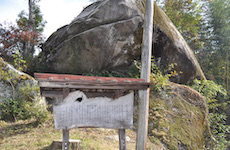 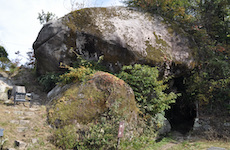