How Families Lived in Tsumago This house was restored in 1968. Notice how the roof is made not of thatch or of tiles, but of wood shingles held in place with crosswise lengths of wood that are weighted down with stones. Most houses in Tsumago used to have roofs like this, with the disadvantage of being extremely flammable. The interior of the house follows a very common floorplan known as heiretsu futama dori, meaning it is two rooms deep behind the front room (ita no ma), and the rooms are parallel with the road. This was a “starter house” for a young couple; it is divided into three clear sections from front to back. The front third of the house, which opens directly onto the road, would have been used for selling items like dumplings and disposable straw sandals to passersby. In the middle third is the irori hearth; the zashiki, or tatami-floored rooms, are at the back of the house. In the hearth part of the house, there is a small aperture high up in the right-hand wall through which at least some smoke could escape, and a little hanging roof that protects pots and pans from dust. The large wooden door at the left of the house was for horses. They would be led across the packed-earth floor to a stable at the back of the house. The space above the beams and the small second-floor space were used for storage. 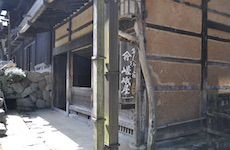 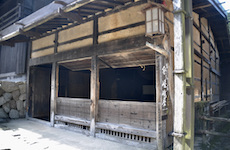