Nostalgia for the Postmen This post office displays many of the hallmarks of classic post-town architecture: an overhanging upper story supported by protruding beams (dashibari-zukuri); windows decorated with fine wooden lattice work (senbon-koshi); and even an 1870s-style black postbox outside. Despite its old-world appearance, the building actually dates from 1979, when it was constructed on the site of the former police station. Inside there is a small exhibition on the history of the Japanese postal service. Interesting objects include a postman’s uniform from 1871 (the year when the post office was founded), a bugle to keep bears at bay (mountain postmen have more than dogs to worry about!); and miniature reproductions of Japanese postboxes over a century and a half of evolution. The old post office, a single-story, Western-style gray building dating from 1915, can be seen a little further along on the opposite side of the road. 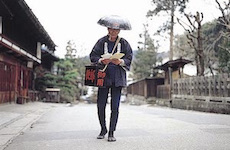 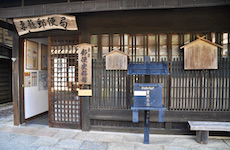 Weekday 9:00〜17:00
（The business is closed on Saturday,Sunday,natinal holidays.）