Japan’s Longest Wooden Suspension Bridge This bridge, which dates from 1922, was built to transport construction materials to the Yomikaki Power Plant about 2 kilometers downstream. Consisting of three stone piers and four spans, it is 247 meters from end to end, making it the longest wooden suspension bridge in Japan. It would have been more economical to build the bridge further downstream, where the river is narrower. Momosuke Fukuzawa, the flamboyant entrepreneur behind both the bridge and the power station, was less concerned with cost than with aesthetics, however. Because a longer bridge would be more elegant, he opted to build it here, where the river is wider. The original bridge was built of chestnut, pine, and cedar, with iron rails running down the middle for handcarts. As time passed and the wood started to decay, the bridge became increasingly dangerous, and it was closed to the public in 1978. In 1993, after two years of restoration work, the bridge reopened. The new version is made of local sawara and hinoki, with inlaid bongoshi, an African hardwood, where the iron rails once ran. From the central pier, a flight of magnificent steps leads down to a sandbar, where there is a small shrine to the river god. The pier closest to the right-hand bank looking downstream was once inscribed with the name of the Daido Electric Power Company, which built the bridge, and the date of completion—September, Taisho 11 (1922). 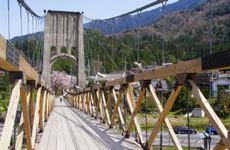 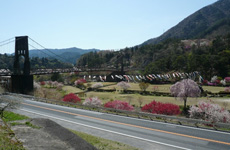