【TSUMAGO】
Kurashina Soreisha
(Shrine for the soul of Kurashina)

A Shrine for Ambushed Souls This is a shrine for Shichirozaemon Kurashina, a senior vassal of Sadayoshi Ogasawara, the lord of Matsumoto Castle. Kurashina was passing through the Kiso area with an entourage of 30 as he was returning from Osaka in 1586. The Kiso domain was the enemy of the Ogasawara domain to which Kurashina belonged. Because of this rivalry, the dominant families of Magome and Tsumago led the townsmen in slaughtering Kurashina and his entire entourage. Once the deed was done, however, the killers felt remorse; and, anxious to avoid a curse, they erected this shrine to soothe the souls of their victims. (Legend claims that the curse was behind the flood that swept away the nearby Kudaridani Guardhouse in 1749.) The shrine originally stood closer to the actual site of the skirmish, which took place higher up the mountain, but was moved here to be more accessible. There is a simple shukaijo (meeting room) nearby where worshippers can gather and have a drink. 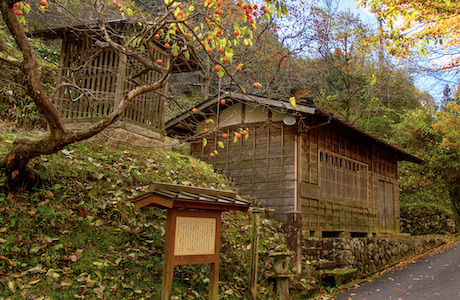