Ornate Ceiling from Olden Times The origins of this temple are thought to stretch back to the twelfth century, when Yoshinaka, the lord of Kiso, dedicated an image of Kannon, the deity of compassion, inside his helmet as a victory offering before marching to battle in the Genpei War, a civil war fought between the Taira and Minamoto clans between 1180 and 1185. Legend has it that the flat circular stone in the temple grounds was where he sat down. The current temple building dates from the middle of the Edo period (1603–1868), though it was restored in 1998. The coffered ceiling decorated with paintings of flowers and animals is the work of a painter who was in the employ of the Kiso magistrate. The priestess responsible for tending the shrine would have lived in the room to the left of the shrine. The stone marker at the entrance bears the inscription kakenuke michi, an old expression for “shortcut.” The Nakasendo curved around to the south on the right of the shrine, so travelers could save a few steps by cutting across the temple grounds. 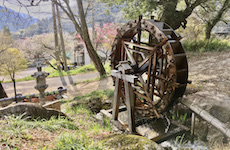