An Inn for Persons of Elevated Rank A honjin, or primary inn, was the highest level of inn on the Nakasendo, hosting feudal lords, court nobles, and high-ranking shogunal officials. This particular primary inn was run by the Shimazaki family from the seventeenth century to the nineteenth century. Another branch of the family ran the primary inn at Magome. Shimazaki Toson (1872–1943), the author of Before the Dawn, a celebrated historical novel about the social upheaval brought to the Kiso region by the Meiji Restoration, was a younger brother of the master of this honjin. The building is a reproduction that was completed in 1995. The design is based on two sets of floor plans (on display inside) from the late Edo period, as well as several other existing honjin around Japan. The original building from the early Edo period faced directly onto the street. As you can see, the late-Edo-period version had a courtyard in front, primarily to act as a firebreak. The building had two functions. The Shimazaki family lived in the left part, where the ceilings are lower and the overall scale more intimate. The guests, meanwhile, slept in the right part. Of particular interest in the guest quarters is the jodan-no-ma (“the raised-floorlevel room”), which is where feudal lords would sleep. The room is distinguished by three things: First, the floor is higher than the rest of the house to reflect the occupant’s high status. Second, it has an alcove with a writing desk. Third, it is surrounded by a corridor, making it easier to defend from attack. 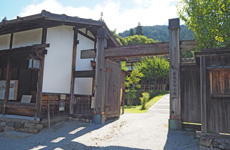