Memories of Earlier Times The interior of the Yama no Rekishikan History Museum has been restored to match its appearance in the early twentieth century. At that time, it served as the offices of the Nagoya Branch Bureau of the Imperial Estates, which was responsible for protecting all the forest land that belonged to the emperor. There is an interrogation room for grilling people suspected of the unlawful cutting down or trading of timber; a couple of holding cells in which suspects were detained; a night duty room for the imperial official on the night shift, complete with futon closet; and a room with an irori hearth for boiling water. The present-day ticket office was once the reception room of the bureau. The former main office now features exhibits on the history of forestry in the Kiso valley, with old woodcutting tools, an explanation of the famous Five Trees of Kiso that were illegal to cut down, and other displays. 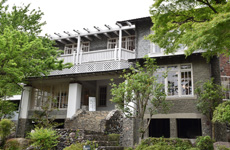 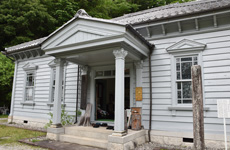