【TSUMAGO】
Site of the Ichikokutochi-Shirakiaratame Checkpoint

Controlling the Wood Economy The guards at this checkpoint would examine any wood being transported to confirm that it was marked with the official brand, proof that it had been harvested legally. The guardhouse was established in 1749 when the original checkpoint at Kudaridani, a little north of here, was washed away by flooding. It remained in operation until 1869. The trees of the Kiso valley represented a key resource of the Owari domain that administered the region. Concerned by over-logging, the domain was determined to protect its resources. Starting in the mid-seventeenth century, they began prohibiting ordinary people in Kiso from cutting down five specific varieties of trees in the region. This prohibition was mercilessly enforced, giving rise to the sinister phrase “Ki ippon, kubi hitotsu,” which roughly translates as, “One of our trees will cost you the only head you have.” The Five Trees of Kiso were hinoki, asunaro and sawara (all species of cypress or false cypress), nezuko (a kind of cedar) and koyamaki (umbrella pine). 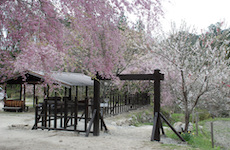