Waterfalls Worthy of a Samurai These two waterfalls are known as o-taki (male; on the left) and me-taki (female; on the right). The male waterfall is taller and broader than its female neighbor. Photographs of log-driving in the 1920s show that the male waterfall was once about 50 percent taller and broader than it is now, with a deep pond at its foot. The male waterfall has appeared in popular Japanese fiction. In Musashi, the classic samurai epic by Yoshikawa Eiji (1892–1962), the hero plunges under the male waterfall to cool his ardor for his ladylove and ensure that he can maintain a proper focus on the discipline of the sword. The route of the Nakasendo was often changed in response to natural disasters like floods and landslides. This was particularly true of this stretch through the steep mountains. Although the Nakasendo now runs above the falls, it is thought to have run below them during the latter part of the Edo period (1603–1868). 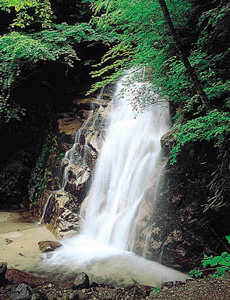 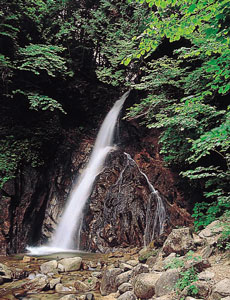